Dogs love to chase ball toys, carry them around, retrieve them for another chase, and chew on them. However, buying a good ball for your dog is harder than you’d think because inappropriate balls can be very dangerous for dogs.

Many a dog has choked to death on a too-small ball or pieces of a ripped-up ball, or destroyed its teeth on a grit-covered tennis ball. Also, if a ball is too hard, it can break a dog’s teeth.

We have assembled our top six toy balls available this year that our test-dogs love! 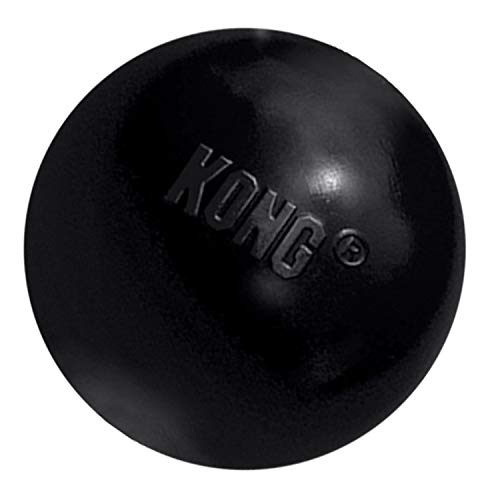 This ball is made out of the same rubber-like material that the company uses to make its famous Kong toys. It’s a solid block of the black rubbery material, with no potentially dangerous coverings; it does have a hole drilled through the entire ball that the company says is a safety measure that allows the dog to breathe if the ball gets lodged in a dog’s airway.

It has a terrific bounce and heft that allows it to be thrown for long distances. Its texture is also soft enough to not damage teeth while encouraging the dog to bite down on it, and it is also extremely tough. The safety hole can be used to insert a rope for dogs who enjoy tugging as well as fetching. 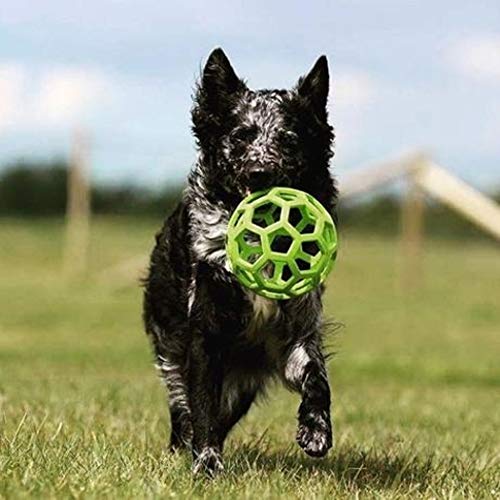 This ball is made out of a very tough, yet slightly stretchy, rubber material. It is hollow and has multiple holes in the outer shell. The holes allow the dog to easily grasp and carry the ball and breathe while carrying the ball or safely breathe if they happen to get it lodged in their airway.

The open hole structure also allows the ball to be used as a food/treat dispenser. Simply insert treats into the ball and let the dog roll it around trying to get the food out.

For dogs who like to play tug as well as fetch, the holes allow both the dog and the person to get a good grip on the ball. 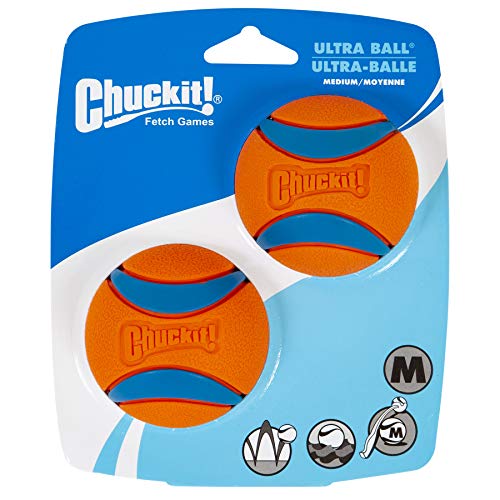 This ball has a long-lasting squeaker in it for dogs who enjoy toys that squeak. The ball is made out of a very durable rubber-like material that is also soft enough to not damage teeth and it encourages the dog to bite down on it.

These balls are designed to fit into the well-known Chuckit! ball thrower device that can turn anyone into a super long distance ball thrower. 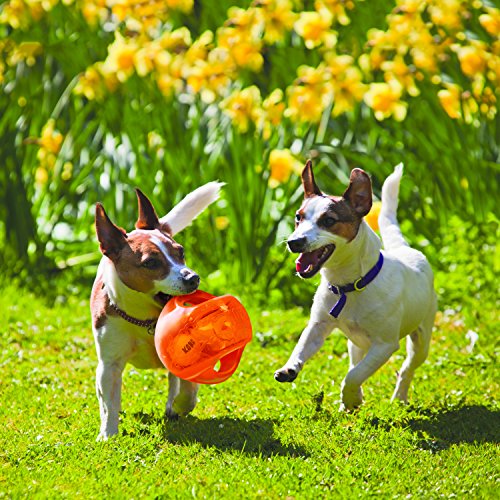 This toy is shaped more like a kettlebell than a ball. It has a roundish bottom part and a handle on the top to allow the dog to easily carry the toy and the owner to easily throw the toy.

It is made out of durable plastic and comes with a squeaker and a tennis ball inside the toy; the dog can’t get the tennis ball out, but many a dog has spent endless happy hours trying. The toy can be squeaked, shaken, and fetched; and it floats in water, so dogs can easily swim out and grasp it by the handle for a retrieve. 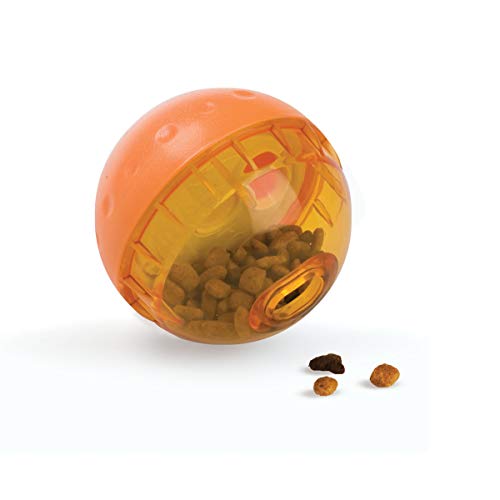 This hard plastic ball can be filled with kibble or treats, and then the dog has to work hard rolling the ball around, trying to get the treats or food to fall out. The difficulty level of the game can be gradually increased as your dog becomes more skillful.

This mentally stimulating toy can change dinnertime from a two-second “inhale the food” non-event into an enjoyable combination of a fun game, mental stimulation, and exercise. What’s not to like?

The ball can easily be disassembled for cleaning in warm soapy water. Please note the two sizes available are not suitable for very small dogs, which can find the size of the ball intimidating and it is possible for them to get their jaw caught in the treat-dispensing opening. 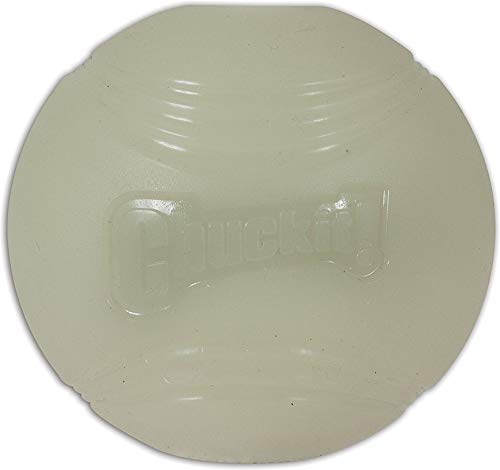 Many pet owners find it difficult to exercise and entertain their pets in the dark time of the year, when they go to work in the dark and come home in the dark. Well, this ball is the perfect solution. It glows very strongly in the dark, makes a loud whistling sound while flying through the air, and is compatible with the Chuckit! line of dog ball throwers.

The ball is made of durable rubber that is hard enough to withstand chewing yet soft enough to not damage a dog’s teeth while encouraging the dog to get a good grip on it.

To make it glow, simply place it under a light or shine a strong flashlight on it for about five minutes and it will glow for around 20 minutes before needing to be recharged.

While all of these products would make an excellent addition to your dog’s toy box, the Kong Extreme is our favorite. It is a very simple, straightforward ball. It is extremely durable, has a great bounce and heft for throwing, comes in two sizes, and is made out of the same material as the black Kong toys everyone has known, trusted, and loved for years.

You’d think buying a ball for a dog would be really straightforward: just go get a ball and start playing, but unless you carefully select the balls you offer to your dog, you could end up killing your dog or seriously damaging its teeth.

The most important aspect to consider is the size of the ball relative to the dog. Many a dog has gotten a too-small ball lodged in its airway and choked to death, or swallowed it and needed to undergo surgery for removal. On the other hand, if the ball is too large for your dog, it will struggle to pick it up and carry it.

For reference, a standard tennis ball is around 2.5″ in diameter. This size is way too small for a large dog like a Labrador or Golden retriever, some of whom have been observed stuffing up to five tennis balls into their mouths at once. The ball should be much larger than the opening at the back of the dog’s mouth and should comfortably fill the entire dog’s mouth.

Think about the dog’s teeth

Another serious problem related to letting your dog play with tennis balls is that there is grit in the covering. This grit will destroy your dog’s teeth over time. Many a ball-enthusiast who was allowed to play with tennis balls has ended up with nothing but ground-down nubs for teeth by the time it was only six or seven.

In addition, a too-hard ball can break a dog’s teeth, especially if it tries to grab a flying ball and misjudges. The proper ball texture should resemble the texture of a Kong-soft to a certain extent, but firm enough to withstand chewing.

Balls can be expensive and you don’t want to have to buy your dog a new ball every week after it chews up the one you got last week.

Balls like tennis balls that have a soft covering can easily have the covering torn off the ball, and then the dog can swallow the covering and choke to death or experience an intestinal blockage. Look for a ball that is one piece of hard rubber with no parts that can be removed.

In addition, there have been a few troubling reports of dogs getting their tongues caught inside a ball, causing serious damage to the dog’s tongue. All of the balls involved in these horrible events were easily compressible squeaky balls with a fairly large opening on one side of the ball only (the hole didn’t go all the way through the ball and there were no other holes in the ball). In these events, the dog somehow managed to get its tongue into the ball through the opening, and then in its efforts to get the tongue out, the ball kept compressing and acting as a vacuum to pull the tongue further inside and trap it. Avoid balls that have these features!

Tips and Tricks for Ball Play with Dogs

We are the Pet Dog Pals, a group of avid pet owners, bloggers, product testers, and writers for all your canine needs! We own a collective 16 dogs and 21 cats to help us test and review pet products. Our top lists and tips come from experience to help you be the best dog owner you can be! 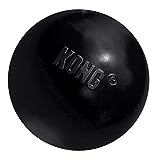